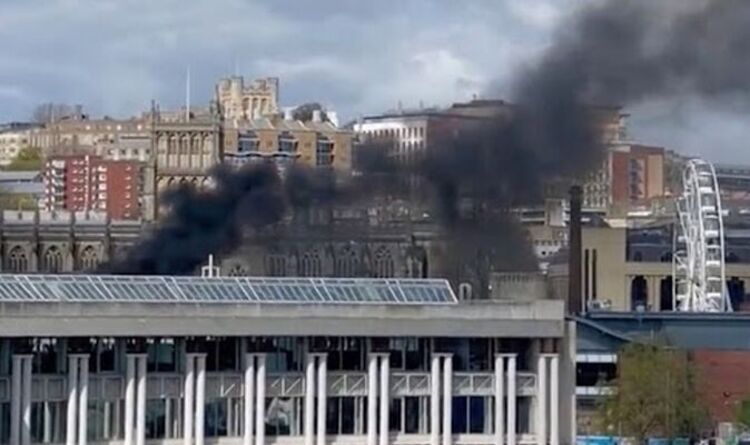 Thick plumes of black smoke were seen billowing from the We The Curious building in Millenium Square near College Green. Eyewitnesses report that the police began to close the area.

In a statement at 2.30pm, We The Curious said: “Our venue was evacuated following a fire alarm, caused by a fire on our roof.

“Avon Fire and Rescue and police are currently on site, all personnel and visitors are being taken care of.”

Firefighters appear to have brought the blaze under control, according to the latest reports.

Martin Booth wrote on Twitter: “Luckily it looks like the worst of the fire has been put out.

“About half a dozen firefighters are now on the roof of We The Curious.”

Bristol Cathedral said it was praying for the safety of those witnessing the museum fire.

They tweeted “Please be careful if you’re heading to the center this afternoon.

“We keep the first responders who witnessed the We The Curious fire in our prayers.”

Dan Morris, the West of England mayor, said it was “horrendous” to hear about the blaze and hoped everyone was well.

A spokesperson for the Avon Fire and Rescue Department said they received a call around 2:05 p.m.

They told the Mirror: “We received a call from We The Curious in central Bristol to report a fire on or in the roof.

“We have deployed seven fire engines and a number of specialist resources – and 40 firefighters.”

He said crews were on the scene within three minutes and the fire was under control around 3:10 p.m.

Originally opened in 2000, the building housed At-Bristol, before closing in 2017 to be renamed.

It is near the Bristol Channel, southwest of the city center, near the quays

the future of Via Guido Reni