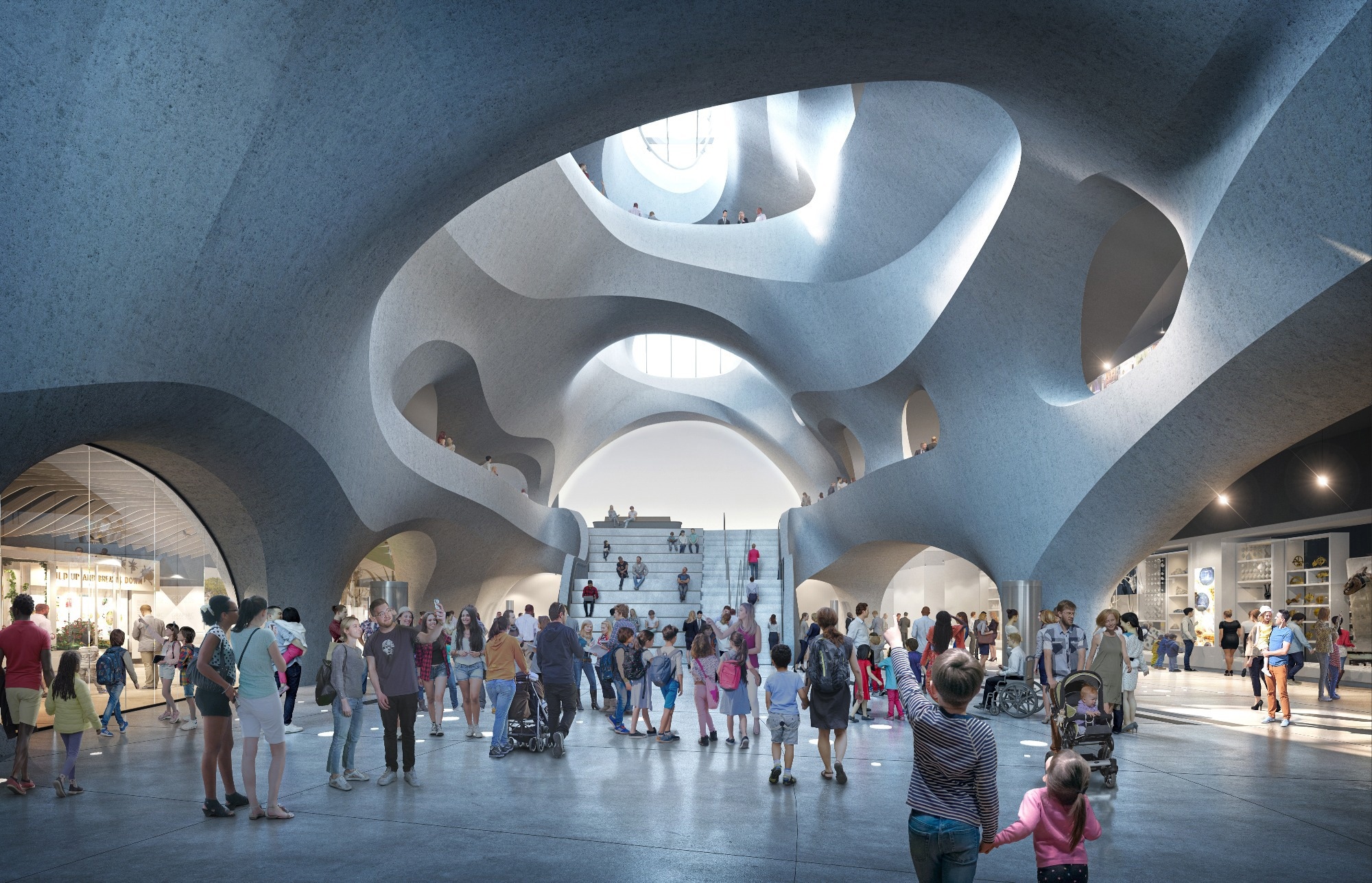 A $383 million expansion and renovation project for the New York Museum of Natural History is nearing completion. The cave-like building, designed by US architecture firm Studio Gang, will improve visitor flow and increase opportunities for public engagement with science.

The Kenneth C. Griffin Exploration Atrium, a four-story civic space that serves as the new gateway to the museum from Columbus Avenue, crossing campus to create a path for visitors from Theodore Roosevelt Park to Central Park West. Image Credit: Neoscape, Inc./© AMNH

The American Museum of Natural History opened in New York’s Central Park West in 1877. Since then, the museum has grown with an eclectic collection of buildings added to its Manhattan campus. These vary in styles from neo-Gothic to neo-Romanesque and neo-classical.

In 2015, the museum announced that it would begin work on an ambitious expansion and renovation project to connect these spaces together and enhance the visitor experience with the Richard Gilder Center for Science, Education, and Innovation.

The $383 million Gilder Center will support the museum’s ambitions to create new ways to learn about the natural world and share the excitement of science with the general public. The project’s focus – on visitor flow and experience – responds to a surge in the museum’s popularity in recent years. It currently receives around five million visitors a year. 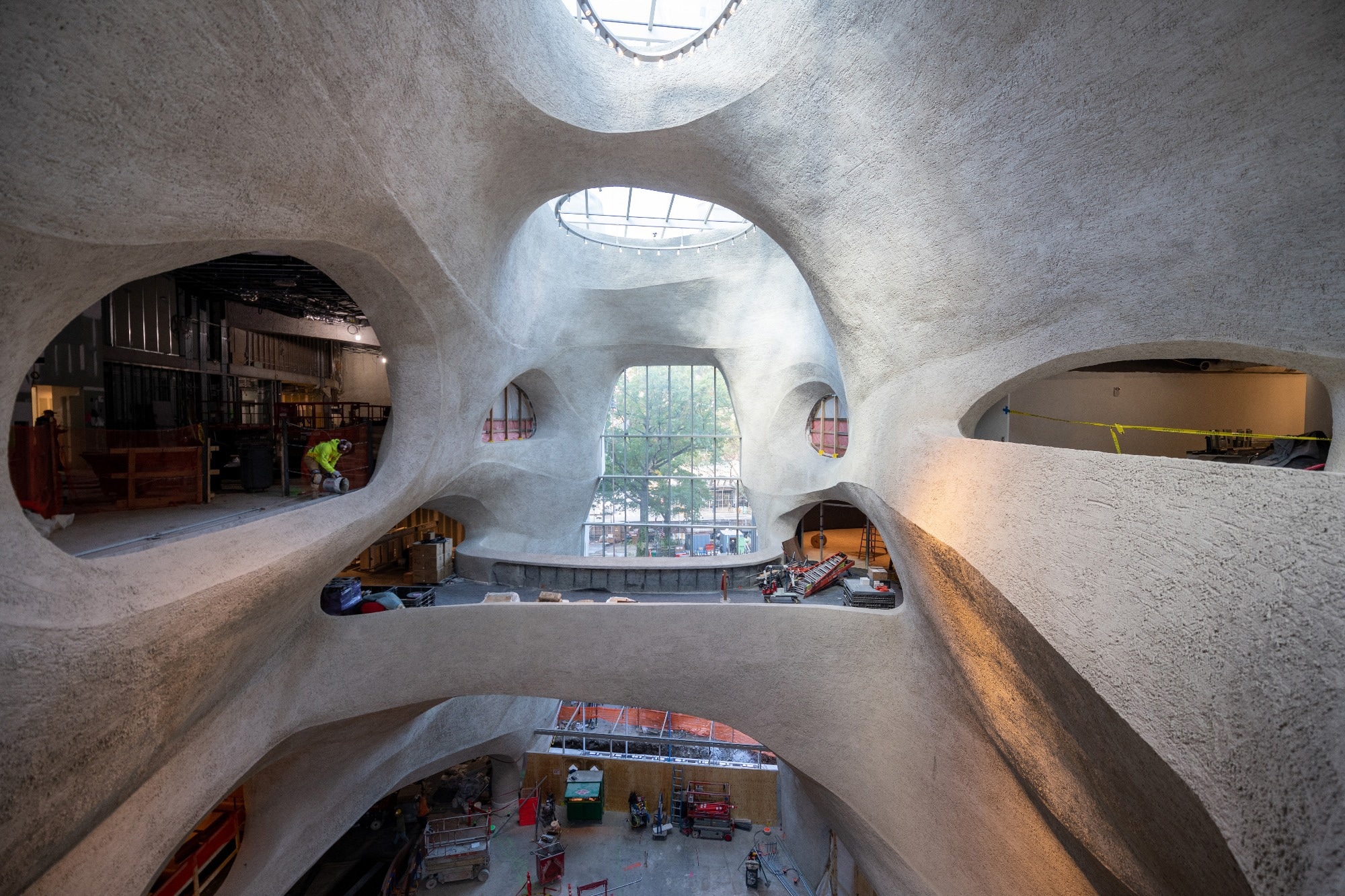 To ensure a flow and better circulation of visitors, the building has a continuous space that transports people from east to west from a new entrance on Columbus Avenue. The building is designed to facilitate the physical connection between the different spaces of the museum, with walkways and openings connecting visitors to the rest of the campus.

A four-story atrium will form the central area of ​​the new extension, where many of these connecting bridges and openings are exposed to view. The atrium will be bathed in natural light and will also contribute to air circulation throughout the museum complex. 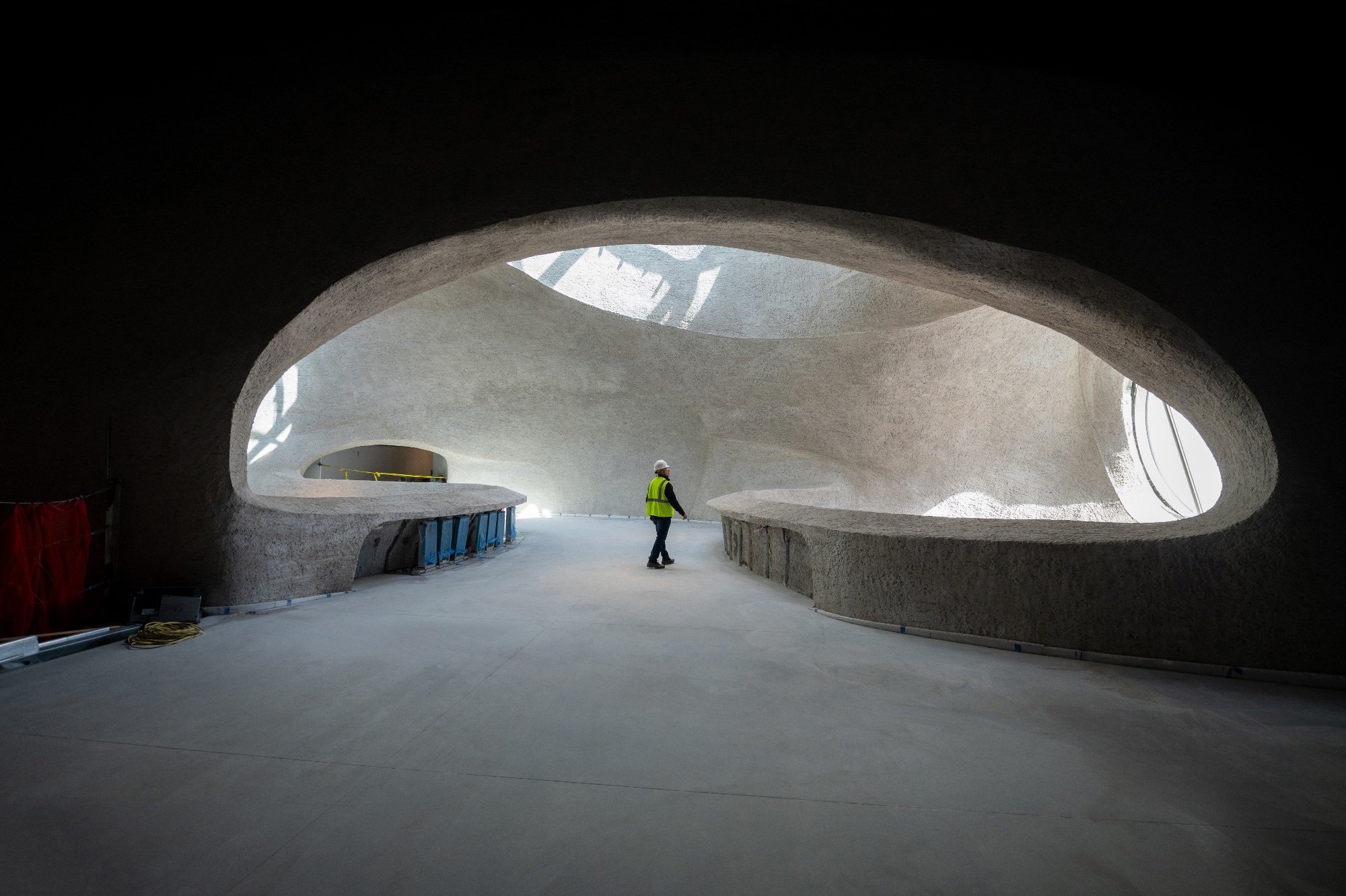 The architects said this design improves visitor flow while creating opportunities for exploration and discovery. They state that the natural daylight in the atrium and the sight lines to the various spaces of the museum will facilitate the type of fluid and exploratory engagement with science that the museum aims to encourage. 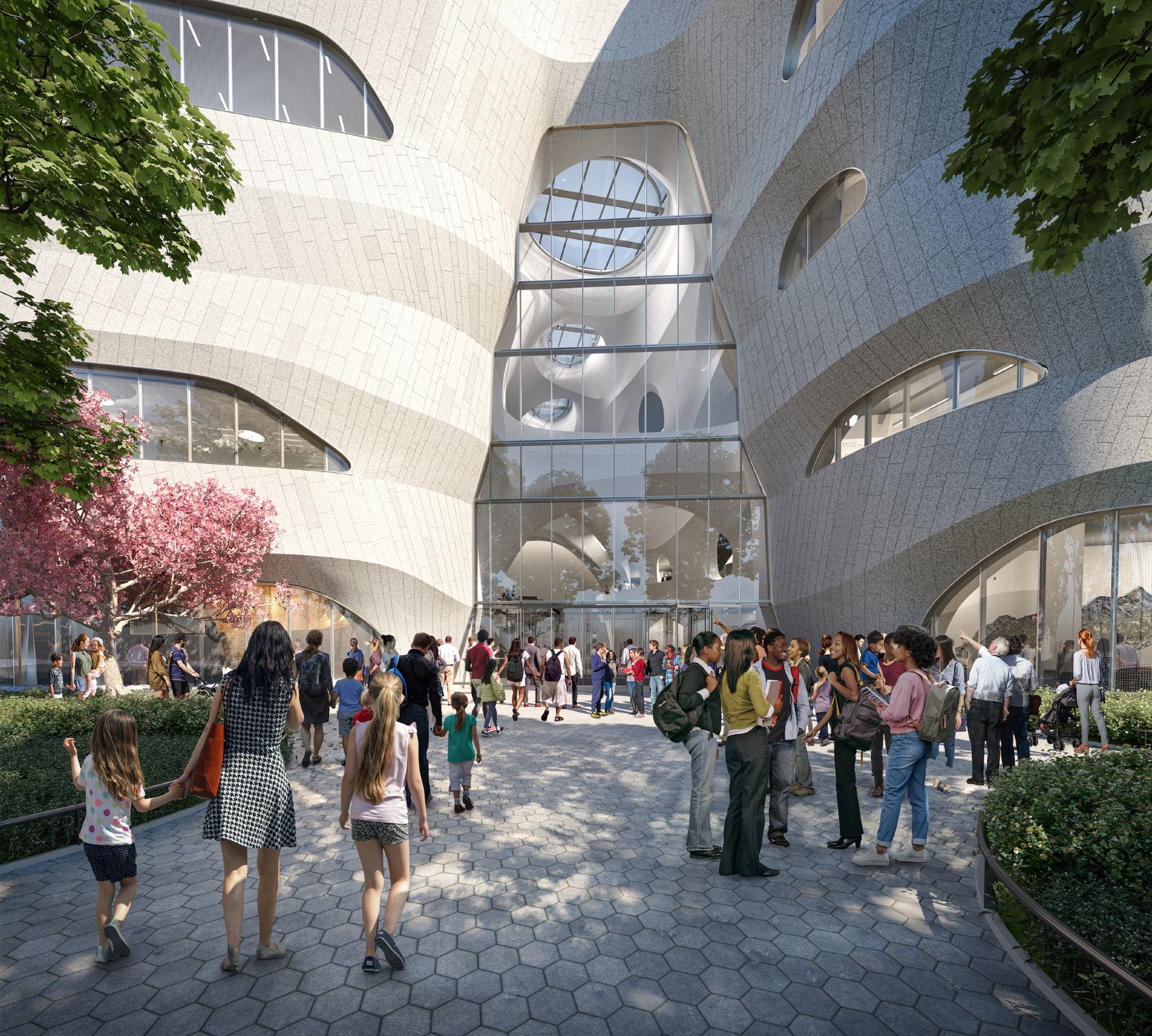 Designed by Studio Gang, the international architecture and urban design practice led by Jeanne Gang, the Richard Gilder Center for Science, Education and Innovation project will offer an immersive experience that reveals the natural world through visualizations spectacular displays of scientific data, an insectarium dedicated to the most diverse group of animals on Earth, a permanent butterfly vivarium, a redesigned library, state-of-the-art classrooms, and more. The project also includes improvements to the adjacent portion of Theodore Roosevelt Park, with a new landscape design by Reed Hilderbrand that adds seating and gathering areas, widens circulation, revitalizes planting and improves park infrastructure. Image Credit: Neoscape, Inc./© AMNH

The project’s focus on visitor experience and improving public science education stems directly from the museum’s core mission of spreading interest and enthusiasm for science. This mission is also supported by initiatives such as professional teacher training, school partnerships, after-school programs with authentic research experiences, and a graduate school for science teachers. The demand for educational offerings like this has grown steadily, and the new development will greatly expand the museum’s ability to provide science education to New York City students, teachers, and families.

The expansion and renovation work covers 230,000 square feet, at an expected cost of $383 million.

On the facade, panels of pink Milford granite will surround the glazing. Milford pink granite is also used in the museum’s iconic facade on Central Park West. The new granite panels are shaped with a 3D cut that creates a wavy and contemporary facade. The architects say the facade evokes geological stratification, linking it to the science education purpose of the museum.

Inside, the walls of the atrium extend the undulating effect carved into the granite panels of the facade. With walkway decks and cutout sections, the walls create an organic looking interior.

This interior appearance is achieved largely through the application of shotcrete. Shotcrete is concrete sprayed over shaped rebar, which hardens to function as a structural component while creating a naturalistic, cavernous interior space. The process requires hand finishing, which will further add to the organic feel of the interior of the extension.

The atrium connects a number of other spaces being renovated as part of this major development project. Among these are a research library, a ‘collections core’ covering five floors, education rooms, an insectarium and a vivarium housing over 80 species of living butterflies. Work is also underway on a permanent, immersive exhibit that explores different scales of life on Earth, Invisible Worlds. The new exhibition spaces were designed by Ralph Appelbaum Associates. 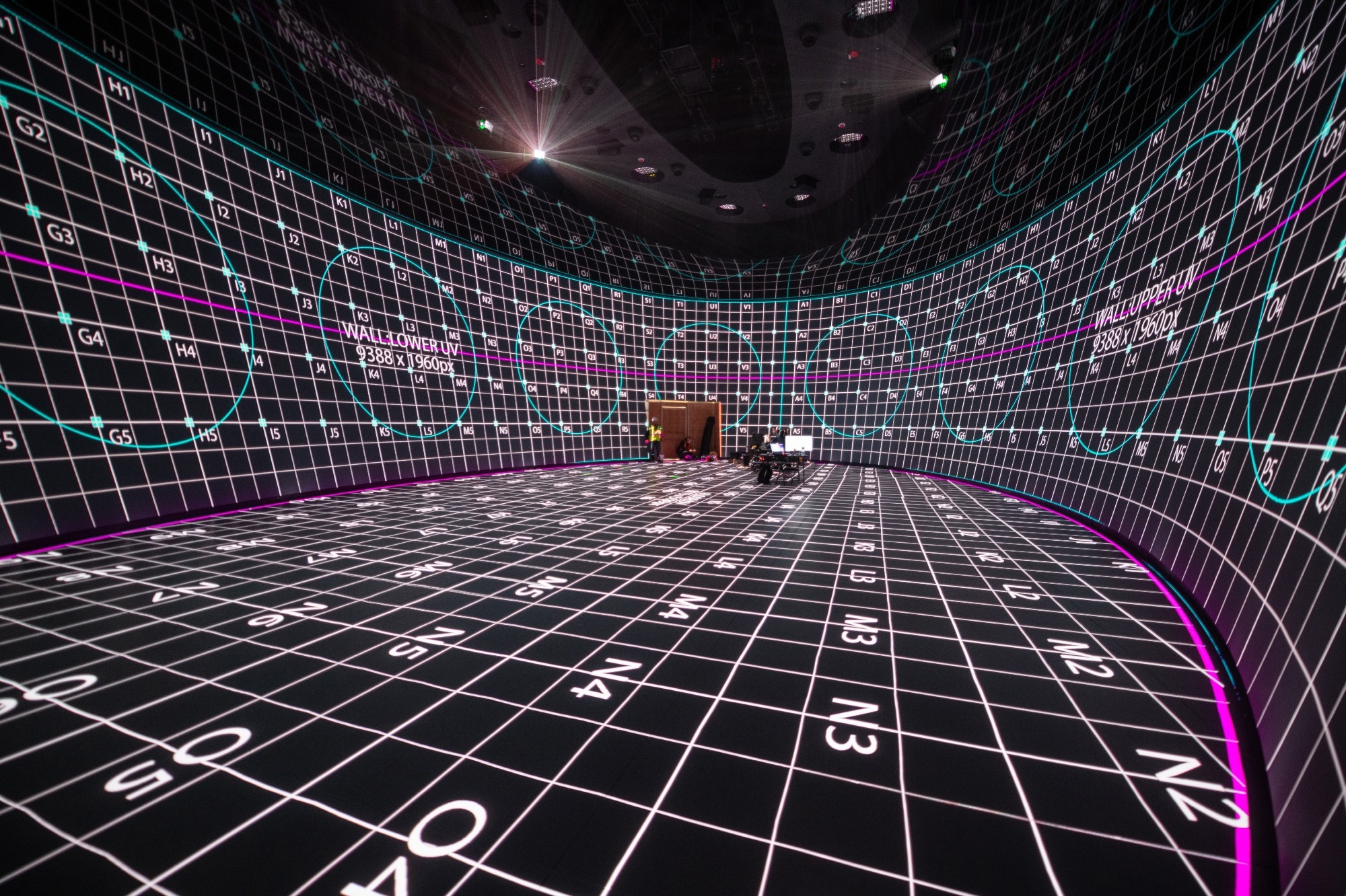 The rear facade of the extension is connected to the other buildings on campus and features a large window with copper cladding. Landscape architects Reed Hildebrand are also renovating the current Theodore Roosevelt Park as part of this major project.

The Gilder Center project was selected as the winning project at the 67th Annual Progressive Architecture Awards in 2020 and was also featured in the March 2020 edition of Architect Magazine.

Final touches are being completed at the Gilder Center this winter. The American Natural History Museum plans to open the doors of the new development to visitors in February 2023. 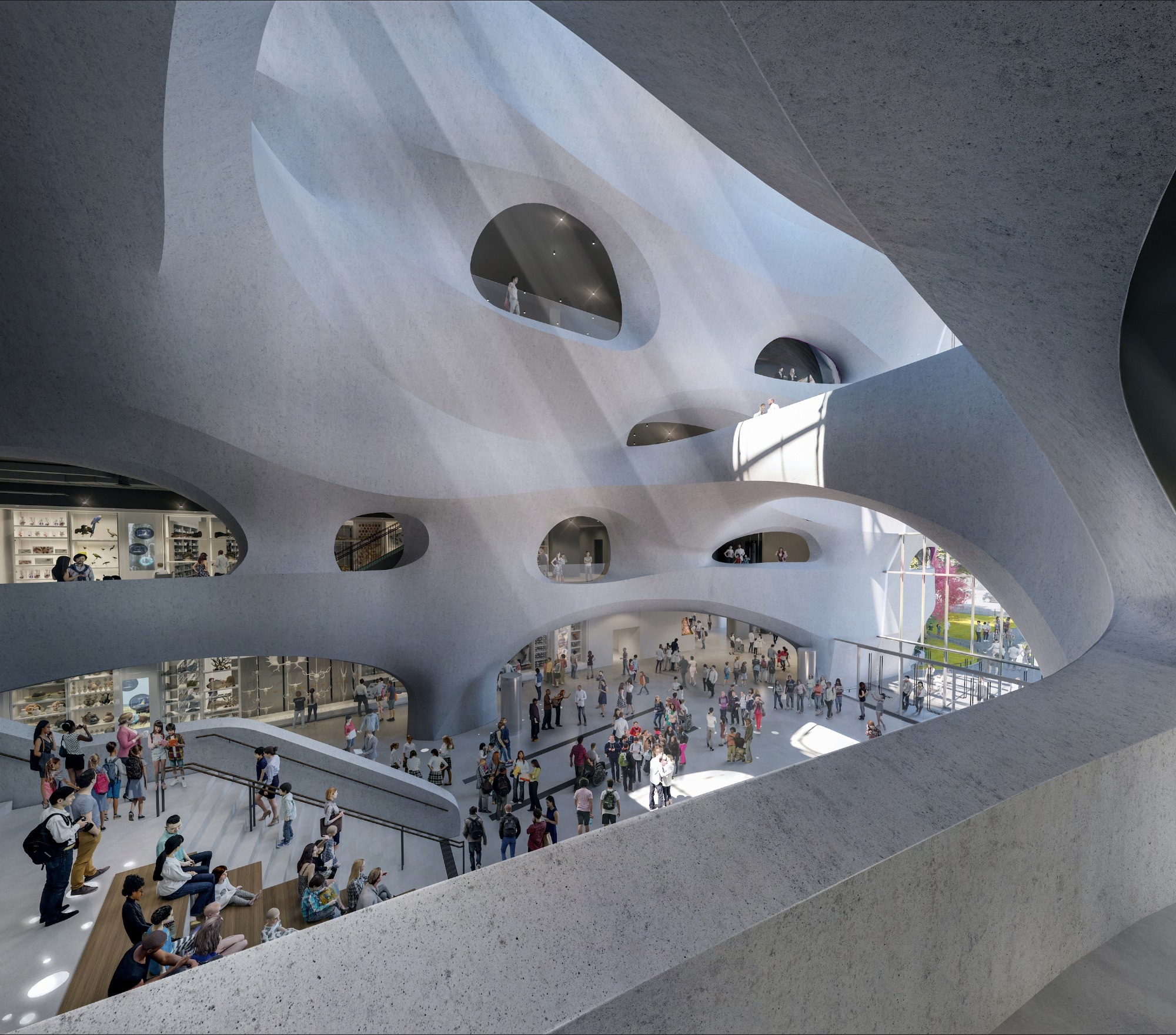 The Kenneth C. Griffin Exploration Atrium, a four-story civic space that serves as the new gateway to the museum from Columbus Avenue, crossing campus to create a path for visitors from Theodore Roosevelt Park to Central Park West. Image Credit: Neoscape, Inc./© AMNH

Disclaimer: The views expressed here are those of the author expressed privately and do not necessarily represent the views of AZoM.com Limited T/A AZoNetwork, the owner and operator of this website. This disclaimer forms part of the terms of use of this website.