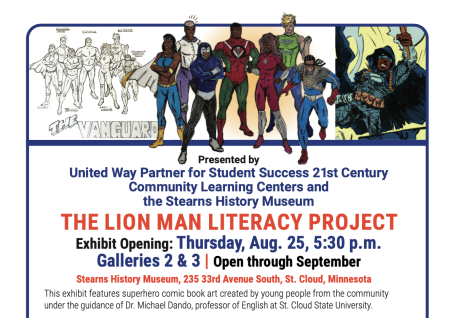 The Lion Man Literacy Project opens as a temporary exhibition at Stearns History at 5:30 p.m. on August 25 and will run through September.

The exhibit highlights original artwork created by participants from various organizations Dando has worked with, including the Southside Boys and Girls Club of Central Minnesota, Too Much Talent, and ISD 742 South Junior High School CRUSH Academy.

The project was inspired by “Lion Man,” the world’s first black superhero, who debuted in Pittsburg, Pennsylvania in 1947 as part of the All-Negro Comics anthology. Dando worked with Eisner Award-winning artists and writers and St. Cloud-area school children to bring “Lion Man” to life by working with the original seven-page comic strip and creating new stories.